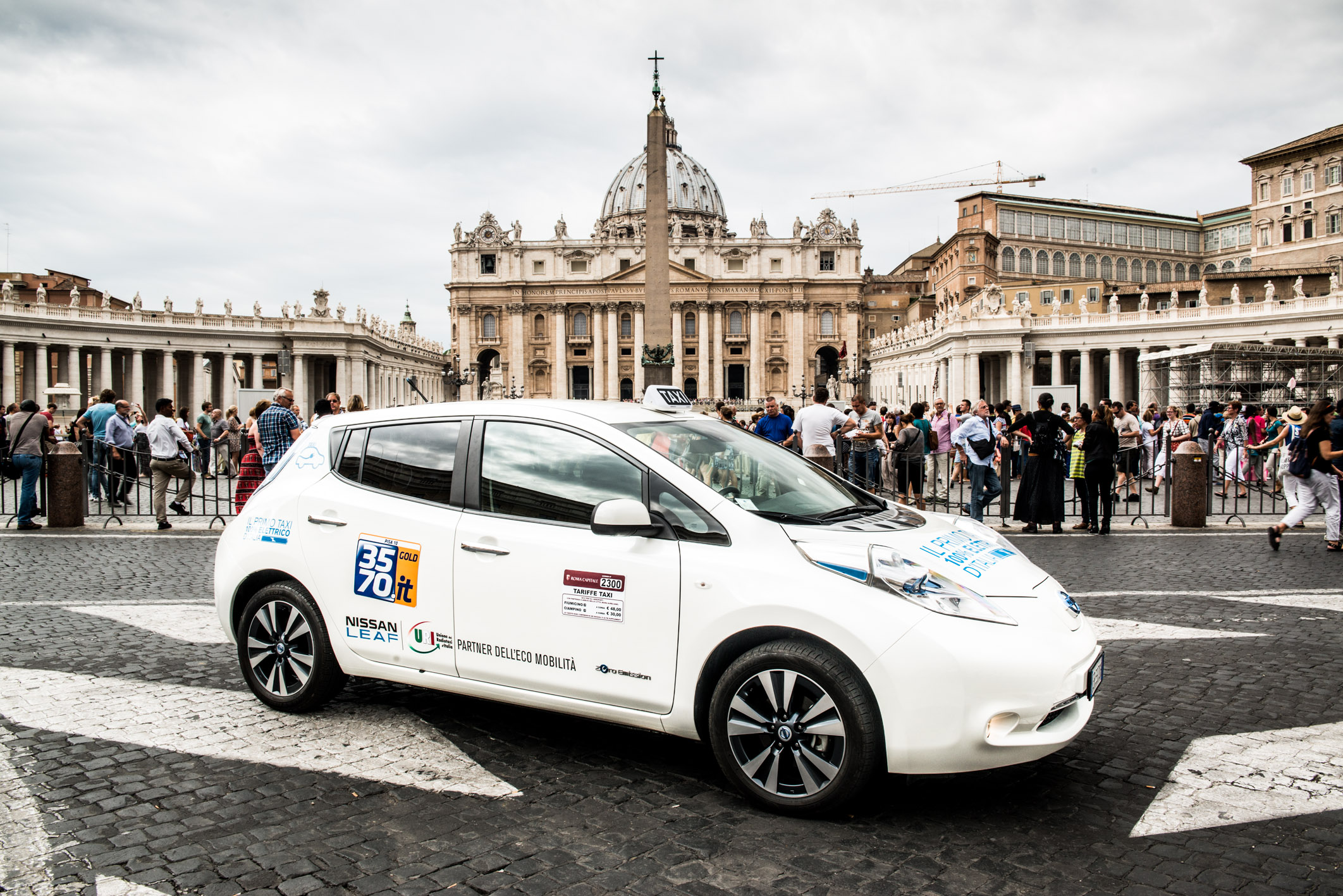 The 100% electric taxi reaches Rome. After Lisbon, Amsterdam, London, New York, Mexico City, San Paolo and Kyoto it is time for the Italian capital city to make a step ahead on the way towards sustainable mobility. Today, after 2 years of studies, market research, experiments and training in the framework of project “Via col Verde” (Go Green) launched in 2012 by URI (Unione Radiotaxi d’Italia – Italian Radiotaxi Union), Nissan and Cooperativa Taxi 3570 the project’s operational phase has begun with handing over the keys to the first two 100% electric taxis in Italy. The initiative has been presented today by CEO at Nissan Italia, Bruno Mattucci, and President of Cooperativa Taxi 3570 and of the URI, Loreno Bittarelli.

According to a survey carried out by URI, which covered both taxi users and people who do not use it, 71% of the interviewers believe that their city is very or quite polluted and 80% expresses positive opinion about the use of electric taxis, which constitute a considerable ecologic and environmental advantage.

The taxis presented are two Nissans Leaf, 100% electric. They do not emit CO2 and have a very low environmental impact as 99% of the materials from which they were produced are recyclable, whereas more than 60% of plastic materials used for the interior was received from recycling. The capital city will pave the way in this project. Indeed, in the upcoming months electric taxis will arrive also to Florence, followed immediately by Milan, above all in view of the EXPO 2015.

The only obstacle to spreading of such initiatives, underlined Roberto Maldacea (expert in sustainability and director of the Master Studies in Eco-Mobility at the University of Luiss in Roma) is the diffusion of charging network: “In 2013 eco-vehicles accounted for 7.1% of all the registered cars. Thanks to eco-incentives this percentage grew to 18.9% in the first nine months of 2014. It is an important sign that the administration should comprehend. The absence of a governing body and legal loopholes may pose a serious threat to the electric mobility development which could significant contribute to reduce pollution in our cities. Suffice it to say that the funds that the Region of Lombardy earmarked for replacement of taxis with electric cars (around EUR 20,000 per vehicle) were lost due to the lack of interest. It is time the public administration made an effort.”

At the same time, the agreement provides for installation of a rapid charging column by Nissan (able to increase the battery duration from 30% to 80% in 20 minutes) at the Hub of the Cooperative at Fiumicino airport.